For the third consecutive month, crude oil prices continued their steady decline throughout December.   Prices closed the month at just over $45/barrel which is 14% lower than the start of the month.  Prices have fallen by an extraordinary 40% compared to their recent high of $76 at the beginning of October.  The following graph shows the daily price movements over the past three months: 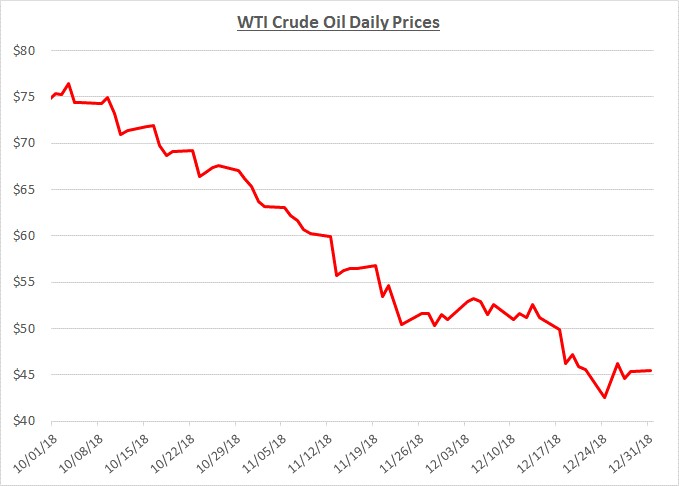 Reflecting further back, the graph below shows how prices moved over the past two years.  It is interesting to see how prices increased at a modest pace from mid-2017 through the beginning of October 2018, then rapidly collapsed during the remainder of 2018: 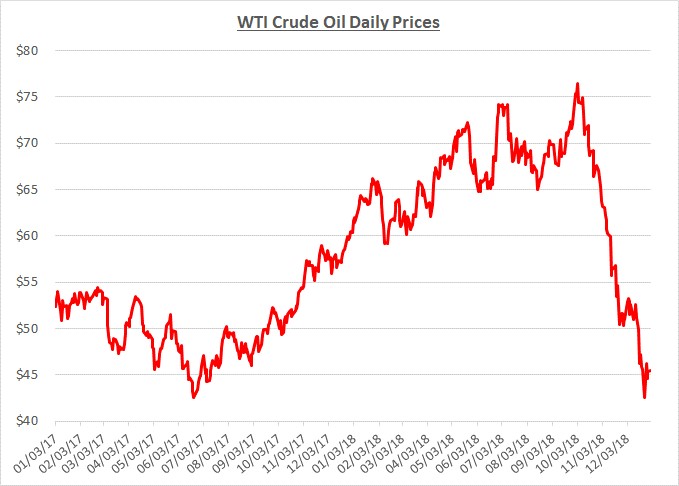 Looking back over the extended period, prices started climbing in mid-2017 as OPEC countries, along with Russia, reduced their oil production levels in an effort to support prices.  These production cuts continued through 2018.

During April 2018, higher prices were driven further by tensions in the Middle East as military air strikes were carried out by the US in Syria.  Shortly afterward in May, the US announced it would withdrawal from the Iranian nuclear agreement followed by a reinstatement of economic sanctions later in the year.

As the summer progressed, oil prices fluctuated as the impact of the Iranian sanctions became unclear.  OPEC and Russia disagreed about changing production levels to make up for lost Iranian barrels.  During September, they ultimately agreed to an increase that appeared to be less than what would be needed which drove prices higher.

Shortly after the start of October, the US announced that a handful of nations would be allowed to continue purchasing Iranian oil for a limited time.  The anticipated impact from the loss of Iranian barrels was substantially avoided and led to a decline in prices.

Meanwhile, the ongoing trade war between the US and China continued.  The lack of any substantial progress toward a resolution raised fears of a global economic slowdown.  The result was that global financial markets took a major downturn along with oil prices.  That decline continued through December.

Wholesale prices for diesel and gas also continued to decline with oil during December.  However, retail prices for diesel only fell modestly compared to retail prices for gas.  Diesel demand has continued to be very strong and will likely continue through the winter heating season while demand for gas has been softening.  The graphs below show the movement of crude oil (converted to gallons) along with wholesale and retail fuel prices over the trailing 15 months: 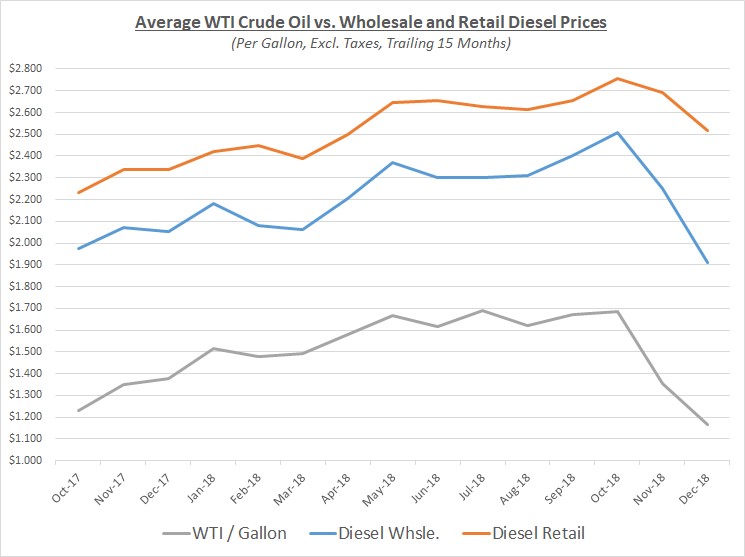 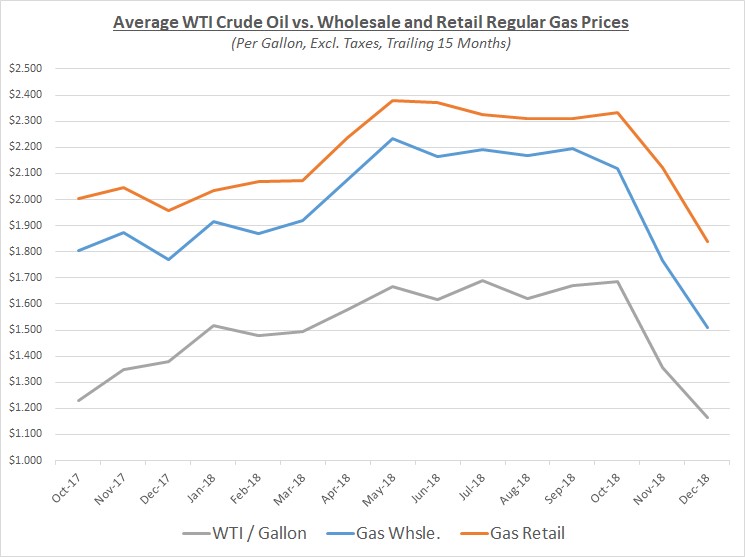 As diesel wholesale prices continued decreasing, and at a faster rate than retail, retail margins soared higher.  Gas wholesale prices also declined significantly, but retail prices moved at the same pace which still kept gas margins at a very high level not seen in many years.  The following graph shows retail margins for diesel and gas over the trailing 15 months: 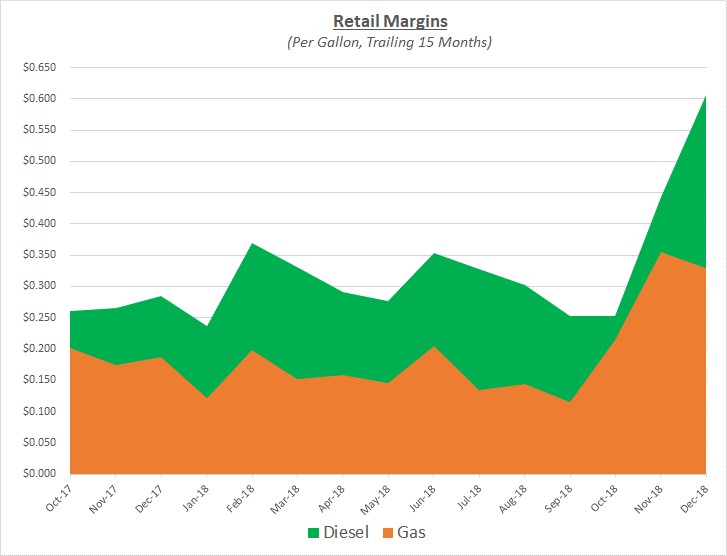 The oil market is always difficult to predict with so many factors to consider along with a few occasional surprises.  2019 is certainly no different and is already starting off with a high level of uncertainty.  However, based on where oil prices currently stand, Sokolis Group believes they don’t have much room to fall further and will more likely begin increasing throughout 2019.

There are several factors that support prices rising; OPEC and Russia already announced in December that they would reduce production in early 2019 to help support prices.  In addition, at the end of December, there was renewed optimism about the US and China making progress to resolve their trade war.

Another factor that may drive prices higher in 2019, particularly the second half, is the implementation of new rules issued by the International Maritime Organization (IMO) that will take effect at the start of 2020.  These new rules will require ships to reduce air pollution by discontinuing the use of relatively dirty bunker fuel or installing costly air scrubbers.  The cheaper option will be to switch fuel and use low-sulfur diesel, the same primary fuel for trucking fleets along with heating oil.

Demand continues to be very strong for diesel fuel and inventories are relatively low.  Although diesel prices have declined recently, they are still at a relatively high level compared to oil.  This is because refining margins along with retail margins have increased with the demand for diesel.  The IMO rules will require more production of diesel fuel which will cause demand for oil to increase.  However, refining resources are already running near capacity and could be strained to meet the demand to produce more diesel.

For all the reasons mentioned above, Sokolis Group anticipates crude oil prices will begin to rebound toward $50/barrel in early 2019, then potentially reach $60 and beyond by the second half of the year.  In addition, there is strong possibility that diesel fuel prices will remain elevated throughout the year compared to the underlying price of oil due to additional demand for this refined product.  Also, keep in mind that if there are any unplanned disruptions to refining capacity, price spikes may be severe.