Oil prices hovered near $53 per barrel for most of June, then quickly increased toward $60 during the last 10 days of the month.  Prices closed the month at over $58 after increasing $5 during late June, or 9%.  Overall, prices are up almost 30% since the start of the year.  The following graph shows the daily price movements over the past three months: 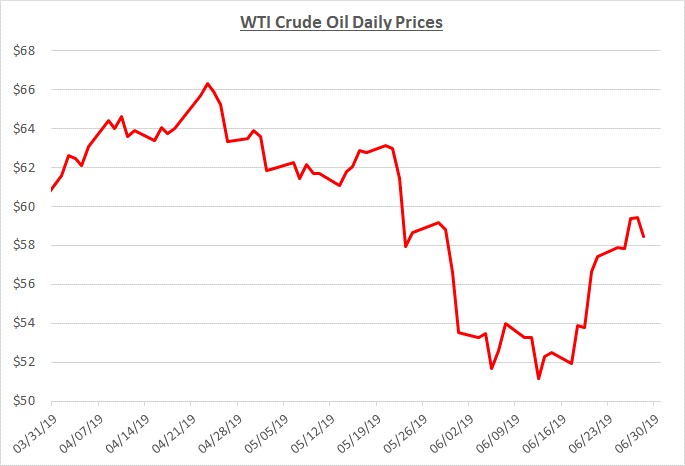 The start of June followed a significant decline in oil prices during the last week of May.  Prices fell sharply in May because of a pessimistic outlook for future oil demand resulting from ongoing trade tensions between the US and China along with a new US trade rift with Mexico.  In addition, oil inventories unexpectedly began increasing despite ongoing production limits implemented by OPEC and other countries attempting to balance global oil supply and demand.

As June began, a trade agreement was quickly reached between the US and Mexico but that development was not enough to support an increase in oil prices.  This positive event was offset by the lack of progress related to the US-China trade conflict along with inventory levels that continued to rise.  Even attacks on oil tankers in the Persian Gulf during early June had little upward impact on prices.

Near the end of the 3rd week of June, two primary factors caused prices to rise rapidly; the first was an announcement that the US and Chinese leaders would meet during the G20 summit at the end of June to discuss trade.  The second factor quickly followed when news broke that Iran had shot down a US drone under questionable circumstances.  The combination of the positive development in the US-China trade conflict, which could increase demand for oil, followed by the possibility of an escalating military conflict in the Middle East, which could decrease supply, caused prices to rapidly increase.

Further support for rising prices came from news that oil inventories started declining in late June.  Additionally, an explosion and fire at a Philadelphia refinery, one of the largest on the East Coast, resulted in a decision to shut down the facility indefinitely.  The refinery was a large producer of gasoline for the Philadelphia and neighboring eastern markets and the disruption in supply elevated prices for gas in those areas.

Although prices rose quickly near the end of June, averages for the entire month were much lower than May.  The significant decline at the end of May resulted in lower prices for most of June which impacted the averages.  However, retail prices did not fall as quickly as wholesale which is typical when prices are declining quickly.  The graphs below show the movement of crude oil (converted to gallons) along with wholesale and retail fuel prices over the trailing 15 months: 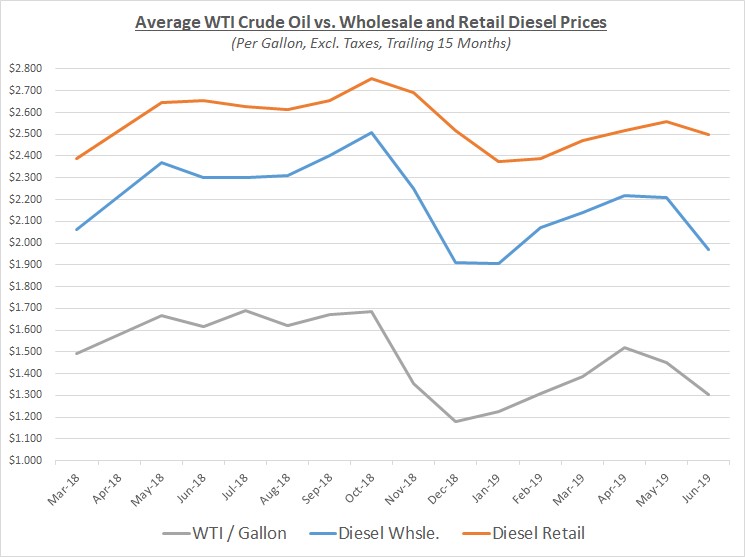 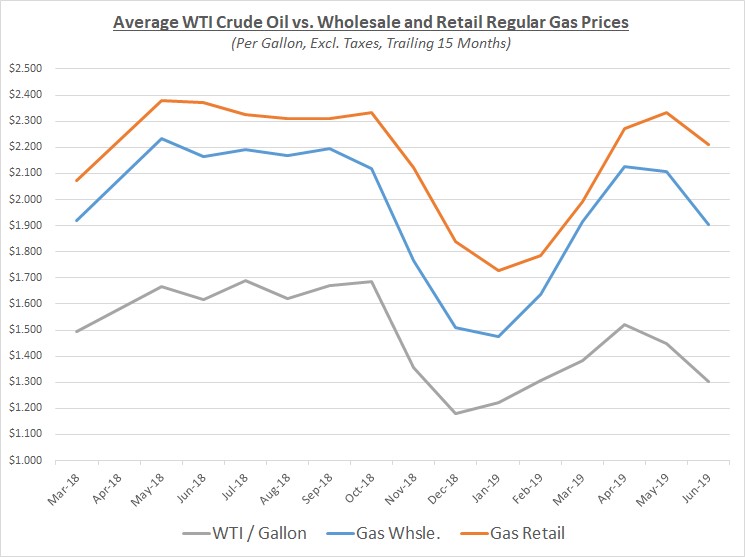 Due to the way average wholesale prices declined in June while retail prices lagged, retail margins increased significantly.  In fact, margins reach their second highest level in many years.  The following graph shows retail margins for diesel and gas over the trailing 15 months: 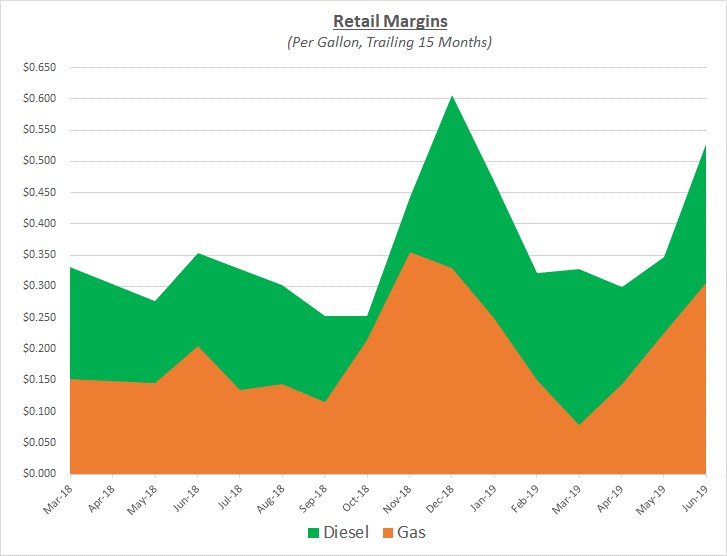 As we look toward July and the second half of the year, Sokolis Group expects oil prices will reach $60 per barrel and potentially climb beyond the mid-$60’s.  Gasoline prices will continue to feel upward pressure during the remainder of the summer driving season, particularly on the East Coast, as a result of the refinery closure until alternate supply sources are normalized.

The primary near-term driver for rising prices is news from the meeting between the leaders of the US and China at the end of June that they are taking positive steps to reengage negotiations to end their trade dispute.  In addition, OPEC and Russia have recently indicated they are considering an extension to their production cuts in order to keep supplies tight for the remainder of the year.

As we’ve previously noted, prices are also likely to begin climbing again during the second half of the year based on several contributing factors besides any potential resolution of the US-China trade conflict.  The production cuts by OPEC and Russia may start to have an impact on balancing global supply, tensions in the Middle East could worsen, and compliance with IMO 2020 requiring ships to burn cleaner fuel will increase demand for diesel fuel.