Oil prices traded in a very narrow range during most of October following a short period of significant volatility during September.  October’s prices opened and closed the month at just over $54 per barrel.  The following graph shows the daily price movements over the past three months: 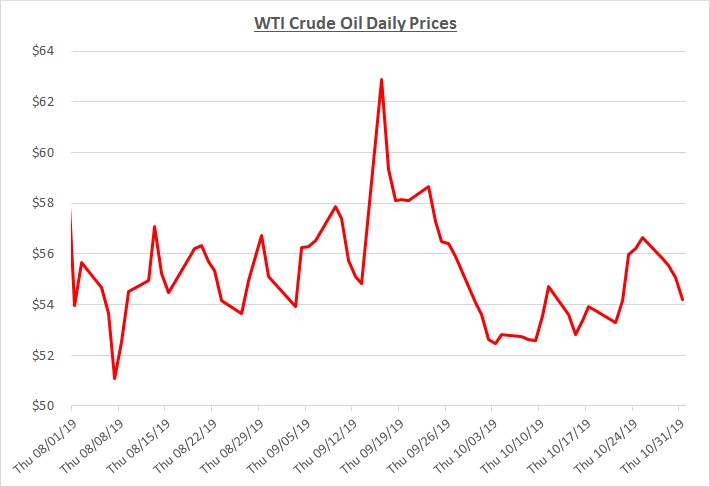 September’s volatility was caused by an attack on Saudi Arabia’s oil refining facilities during the middle of the month.  Prices spiked immediately following the attack.  However, concerns about supply disruptions in the Middle East quickly abated when it became clear that a retaliatory military response would not occur.  The refinery that was attacked was also able to resume limited production in a relatively short time.

As tensions lowered, prices declined through the last half of September and remained in the low $50’s for most of October.  There were few developments in October to impact prices until the last week of the month.  During that time, prices showed modest growth as OPEC indicated it would consider the possibility of making deeper productions cuts to help support higher prices.  In addition, US oil inventory levels declined unexpectedly after an extended period of increases.  The bump in prices lost momentum as the unresolved US-China trade war continued to limit optimism about future global economic activity and its related demand for oil.

Due to the way prices declined during the last half of September while remaining lower through October, overall average prices for oil decreased slightly.  Despite the decline, average wholesale and retail prices for diesel increased slightly as demand remained strong.  Meanwhile, gas wholesale prices were flat while retail prices increased.  The increase in the gas retail average was primarily influenced by supply disruptions on the West Coast as several refineries dealt with maintenance issues.  The graphs below show the movement of crude oil (converted to gallons) along with wholesale and retail fuel prices over the trailing 15 months: 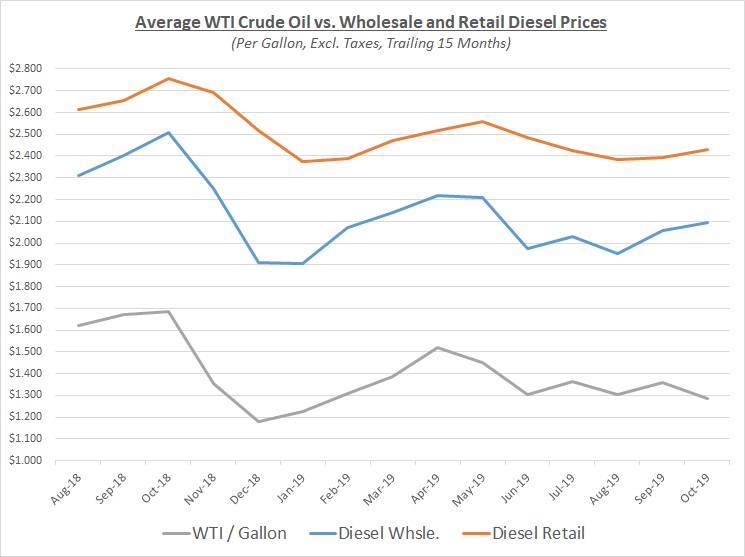 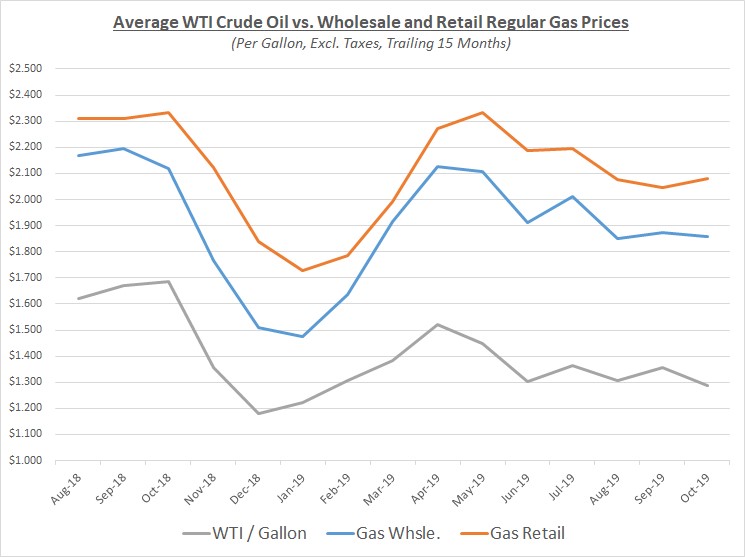 Since retail and wholesale prices for diesel moved in sync, margins were relatively unchanged.  For gas, retail margins increased modestly as retailers found opportunities to increase their prices slightly while wholesale prices remain flat.  For both fuels, retail margins continue to be at more typical levels although gas margins are on the higher end of their usual range.  The following graph shows the margins for over the trailing 15 months: 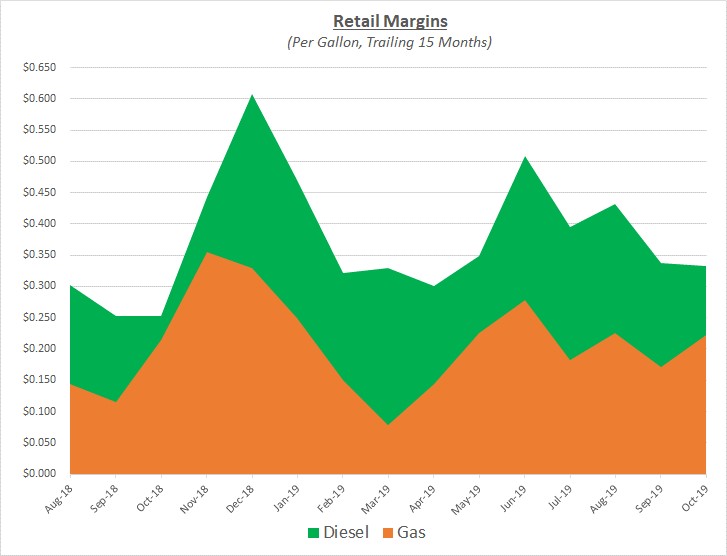 Looking toward the remainder of the year through the start of 2020, Sokolis Group continues to anticipate that oil prices will climb back to $60 or more per barrel.  As we have previously noted, there are multiple factors that support rising prices even before considering the possibility of future conflicts in the Middle East.  Prices could be driven higher as oil inventories have recently shown a declining trend while OPEC and Russia are considering deeper production cuts.  In addition, the deadline for the IMO 2020 maritime fuel transition is approaching which is anticipated to increase demand for oil and diesel fuel.

It’s also important to consider that even if oil prices do not increase significantly over the next few months, wholesale and retail prices for refined fuels could still increase, particularly for diesel.  The margin between the cost of oil versus the wholesale cost of refined fuels is commonly measured as the “crack spread.”  The 3:2:1 crack spread is based on producing two barrels of gas along with one barrel of diesel for every three barrels of oil.  The following graph shows the 3:2:1 trend over the trailing 15 months: 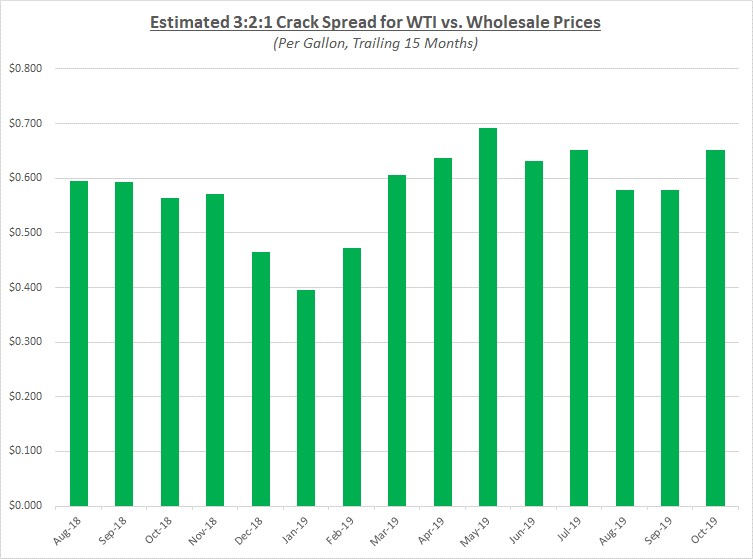 The trend shown above reflects some variation, but the spread has been running higher since the spring of this year.  Generally, the spread can be driven higher when demand for fuels increases while refining and distributing capacity is limited.  This can occur due to unexpected disruptions to refineries and distribution networks which often result from storms and fires as we have recently seen.  Planned disruptions also take place, such as during this time of year when refineries typically shut down for short periods to perform preventive maintenance tasks while also shifting production for winter blends of gasoline.

As mentioned above, demand for diesel fuel is expected to increase from IMO 2020 while demand for heating oil (essentially diesel fuel) will be increasing during the colder months.  Therefore, in addition to our view that the underlying price of oil is likely to increase, we also believe greater demand for diesel will cause the crack spread to increase.  The result will be higher fuel prices for the foreseeable future.